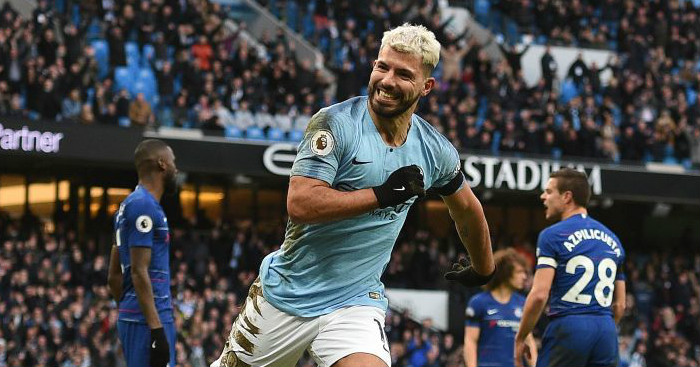 Chelsea manager Maurizio Sarri and captain Cesar Azpilicueta have both apologised after their side’s 6-0 defeat at Manchester City.

City led 4-0 after 25 minutes as Chelsea lost their third straight away game, conceding 12 goals without reply.

The Blues have now slipped to sixth in the Premier League table, below Arsenal on goal difference.

“In the last three matches away we’ve played very badly so we need to say sorry,” said the 69-year-old Italian.

Sergio Aguero completed his hat-trick with a 56th-minute penalty before a late second for Raheem Sterling condemned Chelsea to their worst defeat since losing 7-0 at Nottingham Forest in April 1991.

“It is one of the worst nights in my career,” added defender Azpilicueta, 29. “It is difficult to explain what happened.

“We are conceding a lot of goals and we cannot accept that. All I can do is apologise to the fans because it is not acceptable.”

Sarri, who left Serie A side Napoli to take charge at Stamford Bridge last summer, was asked if he was concerned about his own future.

“I don’t know,” he said. “You are asking me [about] something which is not my job. I am worried about our performances, not about the club. You’d have to ask the club.

“I want to study, I want to understand. I do my best and the players do their best. For the moment I have to say only sorry.”

We are in trouble – Sarri

After losing 2-0 to City in the Community Shield, Chelsea went unbeaten in 18 games. They have since lost seven out of 21 in all competitions.

“I’m surprised because at the beginning of the season we played better away than at home so I don’t know what has happened but at the moment we are in trouble,” Sarri added.

“In the last three or four matches we were without a reaction from the first difficulty so we need to understand.

“It is difficult to describe our performance, it’s difficult also to understand. We started well but after four minutes we conceded a goal in a stupid way.

“We had only to stay in the match but the reaction was not good. In the 20 minutes after the first goal we made a lot of mistakes against the wrong opponents because they played some fantastic football.”