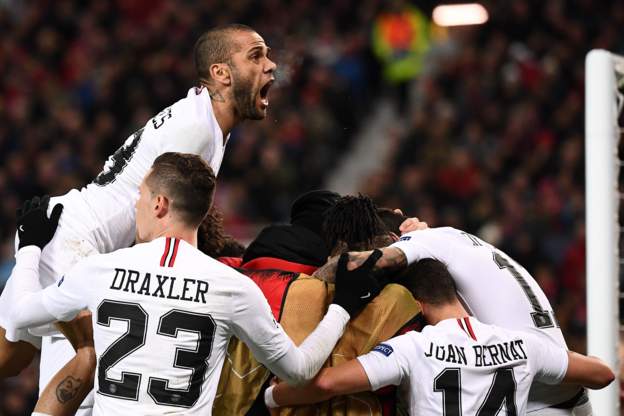 Man Utd blown away by PSG for Solskjaer’s first defeat

Manchester United must mount a miraculous recovery operation to keep their Champions League campaign alive after they were overpowered by Paris St-Germain at Old Trafford.

If you’re just tuning in, Ole Gunner Solskjaer has tasted defeat for the first time as Manchester United boss.

Goals from Presnel Kimpembe and Kylian Mbappe have put them in a very strong position. Pauk Pogba was sent off for the hosts as well.

PSG boss Thomas Tuchel: “Angel di Maria is very competitive. If you tease him, it does not make him weaker.

“I thought he had a good relationship with the fans. He was a bit nervous and needed to be calmer in the first-half. In the end he did well.”

PSG forward Kylian Mbappe: “People have to stop selling fear and being afraid.

“Of course, Neymar is super-important and Cavani is fundamental, but football gets played on the pitch. We showed that tonight. Don’t be afraid: we’re good.”

Former Manchester United midfielder Owen Hargreaves speaking on BT Sport: “That was a big moment for PSG, playing like that while missing two of their best players. Since last season they have added a world-class goalkeeper in Buffon and a master tactician in Tuchel. If they can get Cavani and Neymar fit they can scare anyone in the competition.”

Manchester United midfielder Ander Herrera speaking to BT Sport: “The game was tight until the corner. After the first goal everything changed. The game was under control. The game could have finished 0-0 if they didn’t score from the corner. They then played counter-attack because they have very quick players.

“I think we lost some pace [when Antony Martial and Jesse Lingard went off injured in the first half] but won some combination with Alexis Sanchez and Juan Mata. We were pressing OK and they were not feeling good with the ball.

“We are all optimistic and positive – we are building something good. Today is going to be a tough night and tomorrow is going to be tough day. We are going to fight for the top four and the FA Cup.”